Kissing frogs in a leap of faith 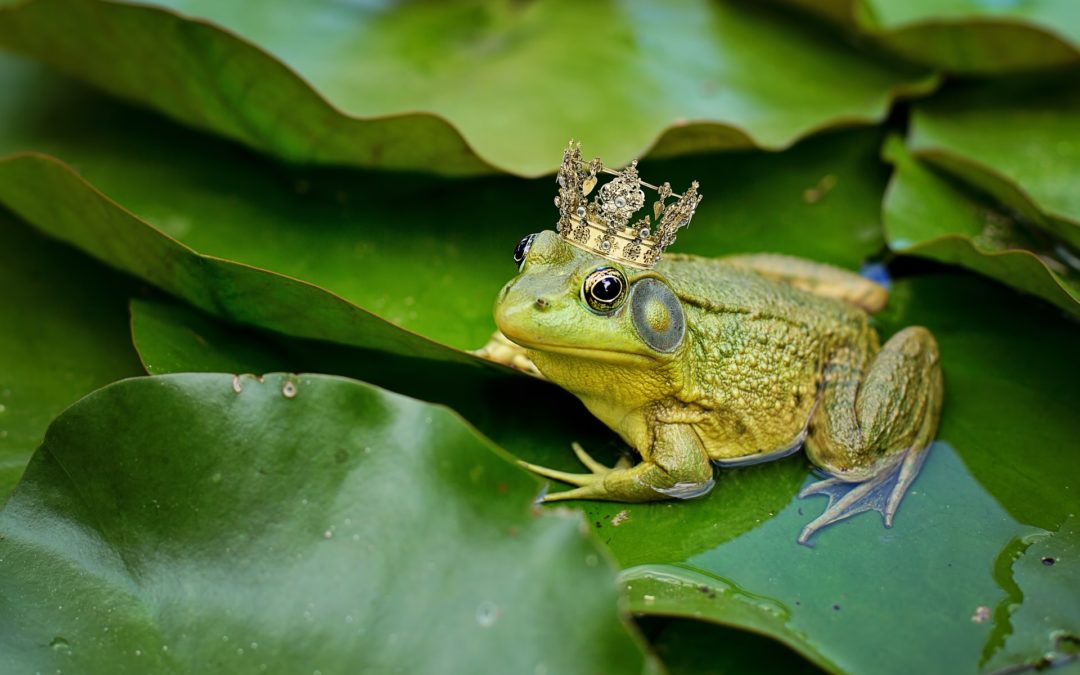 It’s hard to take a leap of faith and say “yes” to life, but sometimes you have to kiss a few frogs and risk meeting some toads if you are to have a chance of creating the life you want and achieving your heart’s desire. Because it only takes one frog turning into a prince to make you glad you puckered up.

As the mother of a three-year-old boy and a nearly six-year-old girl, my day-to-day conversations are currently dominated by three main things. These are: the different species of dinosaurs and their relative strength (as in, “Mummy, T-Rex verses stegosaurus – who would win?”); how much chocolate it is acceptable to consume in a given 24-hour period; and my efforts to correct the often awful messages fairy tales send to children, girls in particular.

Recently, I was reading The Frog Prince to my daughter when she turned to me and asked a characteristically perceptive question: “Mummy, what would have happened if she hadn’t kissed the frog?” There ensued a discussion about keeping promises and doing the right thing (You’ll recollect that the princess promises to eat and sleep with the prince if he dives into the well to get her ball but then balks at the idea when faced with his green chops puckering up for a goodnight kiss.) nuanced by a child-friendly but extremely clear explanation of the meaning of ongoing consent.

After I had seized on this very teachable moment, my thoughts naturally turned to other meanings one could infer from the metaphor of kissing a frog. I say naturally because “you have to kiss a lot of frogs to meet a single prince” is advice I often give to my intercultural coaching clients. When you arrive in a new city or country and are looking to make friends and network, I tell them, you have to kiss frogs. By that I mean that you should accept any invitation you receive (within the bounds of safe conduct, of course – meeting in a public place, etc.). You chat to a friendly woman at a book shop, and she suggests you grab coffee the next day. Colleagues from a different part of the company ask you to join them for lunch in the canteen. A neighbour suggests you meet her sister-in-law because she’s an ex-pat from your home country (If you’re British this invariably becomes: “In fact, maybe you know one another – it is a small island after all!”). Back home, these kinds of random meetings are unusual, perhaps even unheard of, but in ex-pat circles, they are gold!

I met two of my best friends this way. The first I met at the Christmas party of a colleague I barely knew. We got chatting, and she mentioned that being new to Paris she had no idea what to do on New Year’s Eve. I invited her to my party. My other closest buddy was the Paris newbie she met the day after we talked – she brought her to my party, and the three of us have been true blue ever since. I tell clients they have to kiss a few frogs because, while perhaps nine times out of 10, you’ll come away from the coffee/drink/party/mother-and-baby group disappointed and glad it’s over, you only need one of those “frogs” to turn into a “prince” and you have yourself a friend, or maybe even the beginnings of – whisper it – a group.

This wisdom isn’t just applicable to ex-pats seeking to create a life and build a network, however. To me, the bigger idea of kissing a frog is about taking a leap of faith. It’s about doing something that seems unlikely to result in anything useful but, well – you never know! It’s about saying yes to coffee with that nice lady at your yoga class, even if you aren’t sure you have anything in common other than flexibility. It’s about joining the PTA to meet new people, even if you end up leaving after the first year. And, beyond making contacts, it’s also about sending that email to a prospect, even if it is a long shot. Or visiting yet another potential dream house even when the last 10 have turned out to be four dodgy walls and a leaky roof. Or taking a class to learn a new skill, applying for a job that seems way out of your league, offering to volunteer…

When I first had my daughter, I was keen to take her to baby groups. I had her future bilingualism on my mind 24/ 7 and became convinced that a baby rhyme time group was absolutely essential to her English-speaking success. (Madness, I know, but in my defence I had just left my job, had a baby and moved house in the space of a month – I was so sleep deprived I often forgot my husband’s name.) I asked the local librarian if such a thing existed. She told me that nothing did as they had no-one to run it… Do you see where I’m going with this tale? For the next two years I spent one Saturday morning a month singing “The wheels on the bus” and “If you’re happy and you know it” at our local English-language Rhyme Time. I never once regretted kissing the frog that day and replying to the librarian “I could run it!”, and I know she never regretted kissing her own frog and saying “OK, let’s do it!” as, even though I no longer lead the singing, the group exists to this day.

What if you don’t kiss the frog?

Yes, some of the frogs you kiss will turn out to be utter toads. But when that happens, most of the time the only thing you’ll have lost is some time and perhaps the price of a cappuccino. But if you never kiss any frogs, if you never take a chance, you stand to lose a lot more. You’ve got to play the odds, though. The more frogs you kiss, the more likely you are to have one turn into a prince. Some of the best people I have in my life, and some of the best things I’ve done, have come from frog-kissing moments where I had the option to play it safe and instead I chose to say “yes” to invitations, to opportunity, to life.

At a time when connection and contacts are in short supply, I remind myself almost daily of the importance of seizing opportunity when it presents itself and of creating it when it fails to knock. Because, for me, the truly frightening answer to my daughter’s question, “Mummy, what would have happened if she hadn’t kissed the frog?” is not “She wouldn’t have met the prince”. No, in the real world, the answer to “What happens if you never kiss the frog?” is “Nothing ever happens at all”.

One last thing, just for info: of course the T-Rex would win hands-down, every time; and regarding chocolate, I find no better wisdom than a quotation I once read attributed to Miss Piggy: “Never eat more than you can lift”.

If you’re looking to add some magic to your life, encouraging, empowering support from a qualified coach can help you find the courage to kiss that frog and take a leap of faith into a life lived with purpose and on purpose. Contact me for your free introductory coaching session to see how you can upgrade your life.