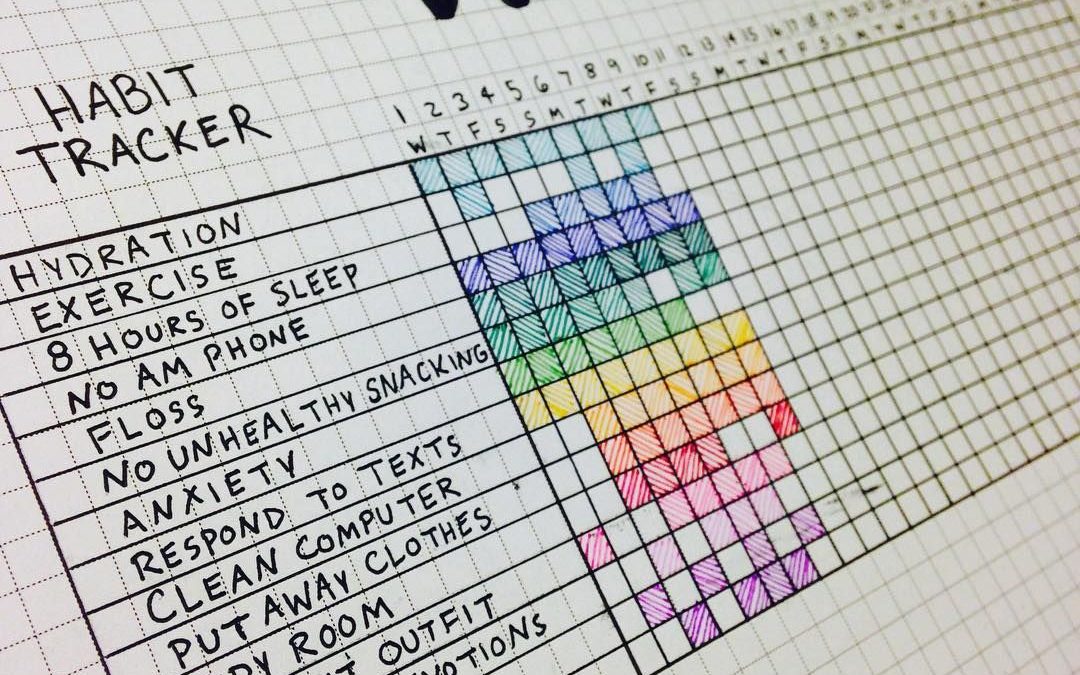 As a former nail-biter, I speak from experience when I say that it is hard to break a habit. However, this month I learned that it can be just as hard to form a new habit. In January, I made a list of some healthy things I wanted to do for myself this year. Drink a litre of water per day, for example. Do yoga every day. Get on the cross-trainer twice a week. Integrate a gratitude practice into my day. Actually use and not just stock those little interdental brushes. I was full of superb intentions.

Well, as you can see from the image above, it’s basically a list associated to a calendar. (Funny story about lists. As we’re leaving for the market the other day, my five-year-old daughter asks, “Mummy, you haven’t made a list of what we need – shall I do it?” My gobsmacked and slightly horrified husband looks at me and gasps, “You’ve created a mini-you!” while I just beamed with pride.)

For me, the first objective of the habit tracker was to provide me with an accessible visual reminder of the habits I wanted to build. It also made me hold myself accountable. As a Good Student who likes getting gold stars on wall charts (Oh my goodness. New plan. Next month, I’m actually buying little gold star stickers. Can’t believe I didn’t think of that before!), it made me feel uncomfortable and dissatisfied when I had to colour a box in red. Not enough to damage self-esteem or motivation, but enough to make me want to do better the next day.

Simply making and hanging your colourful chart will not put in place the good behaviours you’re seeking. You need to make a plan. Flossing’s a no-brainer for me (do it every night before brushing), but drinking water was harder. My cunning plan – which worked quite well – was to fill a litre bottle every morning and make sure I emptied it by the end of the day. I also decided to have a glass of that water while waiting for the kettle to boil each time I made tea. On the other hand, I did not make a concrete plan for how I was going to cultivate more gratitude, and I have to say that’s the habit that I really didn’t manage to create. Needless to say it’s on my March list.

6. It takes more than a month

If you keep trying and trying, but a new habit just doesn’t seem to stick, ask yourself how committed you really are. I included “eat one piece of fruit per day” on mine and, after over a month, I’ve only managed a handful of times. So, I’m wondering how strongly I really feel about the habit. I know it would be good for me, but I eat loads of veg, so I’m not sure it would make as big a difference to my life as my daily litre of water. Ask yourself where the idea for the new habit is coming from, too. Is this something you really believe in and want to establish, or is it an example of you should-ing on yourself or making someone else’s priority your problem? Remember that, like the tracker itself, good habits are there to serve you. Make sure you keep a firm handle on the master-servant relationship when it comes to both.